Blog #1: The History of Wheat and Its Future (Series)

Agriculture has made many great strides in production, genetics, and technology since its early beginning. Specifically, wheat has advanced since it was first gathered and cultivated by humans. It is the most widely produced and consumed cereal grain in the world. Through innovation and technology, wheat has become a vital staple for the human diet. This is the first of five blog posts highlighting the history and future of the U.S. wheat industry through advancements in gene editing and technology.

Early wheat species possessed brittle seed heads that could easily be broken, and the hulls of the seeds would cling to the desired grains. Some of these wheat species grew to be six feet tall compared to modern wheat varieties which are around two to three feet in height. The wheat variety einkorn (Triticum monococcum) is thought to be the first wheat gathered and cultivated. Einkorn impressions are found in Neolithic pottery from the area around modern day Turkey all the way to Great Britain and Ireland. Through human influence and natural breeding, wheat varieties were created through cross breeding of different wheat varieties.

Advancement of Wheat Production Throughout the 1800s and 1900s

Before the 19th century, advancements in wheat production were relatively few and far between. Three major advances occurred during the 19th century that led to the modern wheat industry. First, in 1843, scientists found that soils that have been exhausted of nutrients could be supplemented with chemical fertilizers. 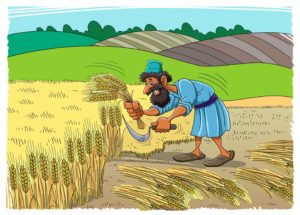 This allowed for fields to be planted more frequently and ensured the wheat plants received all the nutrients needed for healthy crop production. Second, industrialization created an automated milling process of wheat grains that could mill harder wheat grains at a faster pace. Thus, allowing wheat producers to meet the growing demands of the consumer.

Lastly, mechanization of U.S. agriculture in the later half of the 1800s allowed for a more convenient, practical, and efficient system of wheat harvest. Now machines could harvest wheat in a much faster amount of time compared to the manual labor system used before. By 1900, the U.S. produced 655 million bushels of wheat compared to 175 million bushels in 1866, making exporting of wheat a new trade opportunity.

The Future of Wheat

With the world’s population approaching 9.7 billion people and the Earth possessing an already limited amount of natural resources, a growing need for a new sustainable agriculture model is needed. This new model is obtainable through gene editing. Currently, new wheat varieties are being researched and studied all throughout the world. Specifically, the search for wheat varieties that use less nitrogen, are higher-yielding, disease and pest resistant, decrease the worlds reliance on petroleum, as well as work to synthesize a celiac-safe wheat. It is through studying wheat varieties that specific genes can be found and altered to meet these goals. Gene editing and technology is paving the way for the future of wheat as a sustainable agriculture resource to our global food supply.