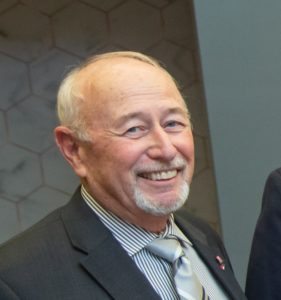 Upon graduation from college in 1969, Ben Scholz began a career in farming/ranching in partnership with his father, which continues today with his wife as partner in B Scholz Farms. In 1999, Ben diversified interest by becoming President/CEO of Producers Compress, Inc., a business offering warehouse space for lease and cotton storage.

Ben’s farming business is located in Collin and Hunt counties, around the communities of Wylie, Lavon and Farmersville. The operation consists of wheat, grain sorghum, corn, cotton, soybean and hay in various rotations year to year.

Ben has been named ‘farmer of the year’ with Collin County Soil and Water Conservation District; ‘Alumni Ambassador’, the highest award an academic department can bestow upon a graduate recognizing career achievements awarded by the College of Agricultural at Texas A&M-Commerce University; ‘Distinguished Alumnus’ of Texas A&M Commerce recognizing alumnus for having achieved illustrious careers in many different walks of life  and the ‘Brother of the Century Award’ from the Alpha Gamma Rho fraternity.